Sharks And Humanity: Artists Say No To Shark Slaughter For Soup

From a giant deformed steel container shaped like a shark overlooking the city’s harbor, to a disturbing oil painting depicting a shark without its dorsal fin, a powerful new art exhibition has opened in Hong Kong to promote awareness of the mass slaughter of these marine creatures — and ultimately the central role Asian consumers play.

Most conservationists agree that an estimated 100 million sharks are killed worldwide each year, and fins from the vast majority of them are used to make shark fin soup — a delicacy at banquets in China and across Southeast Asia.

And it’s a lucrative business; a bowl of this soup can cost up to US$200 in some higher-end restaurants in Asia. 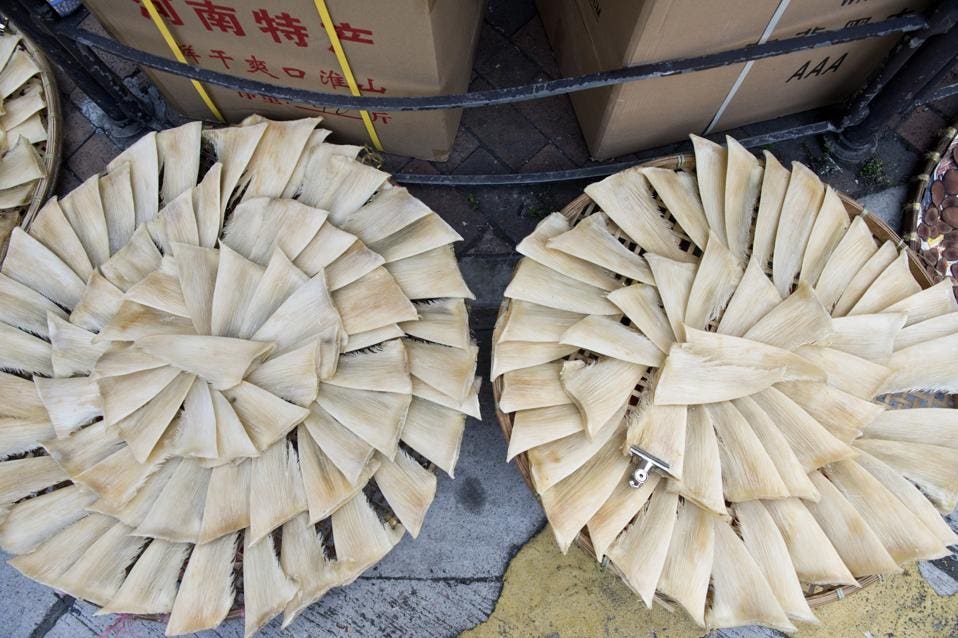 Shark fins are laid out to dry on a street corner in Hong Kong. Shark fin soup has long been a luxury enjoyed by China’s wealthy. (Alex Ogle/AFP/Getty Images)

According to environmental group WildAid, shark populations in some areas have declined by a staggering 98% in the past 15 years, with serious repercussions for the sustainability of our marine ecosystem.

While the practice has spawned numerous campaign groups globally, who have encouraged major hotels to take sharks fin soup of their menus and airlines to refuse to transport the fins, sharks continue to be slaughtered — with culture and tradition overriding the grotesque and inhumane suffering.

The process usually involves the fin being sliced from the live animal before it’s dumped back in the water.

Admittedly, many consumers may not be aware of the price sharks pay for their dish, or indeed what makes these animals so unique and vital to the world’s oceans.  This was the main factor that prompted a group of top contemporary artists to work together to raise awareness and educate people about the plight of sharks. 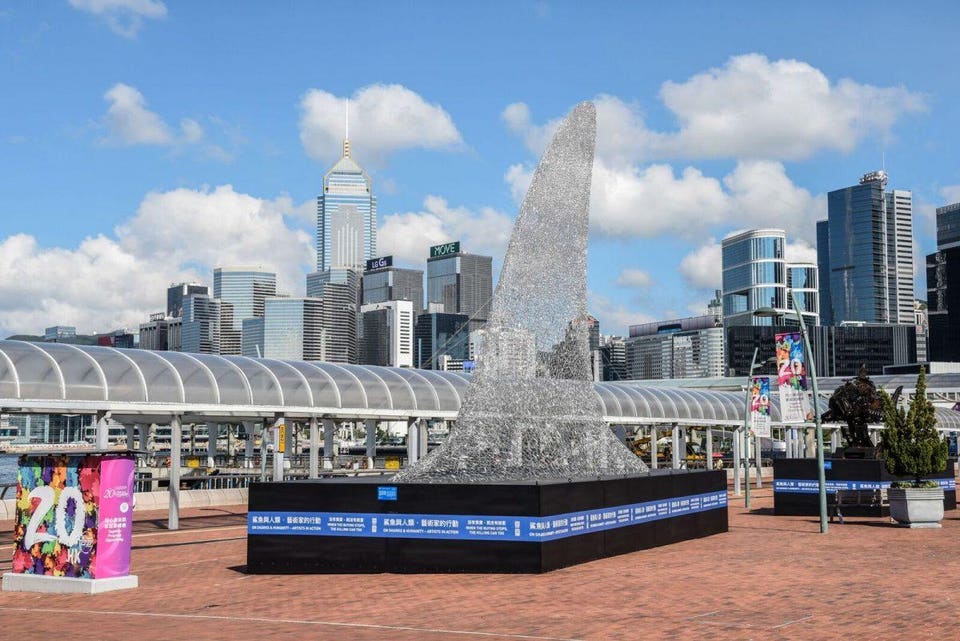 Zheng Lu’s work is made of steel wires welded together — it’s meant to give a feeling that it’s about to dissolve. The artist warned humans will dissolve if they don’t respect nature. (Parkview Art Action)

Their exhibition, “On Sharks and Humanity,” comprises work from 36 international artists and followed similar shows across the globe. According to the organizers, Parkview Arts Action and WildAid, Hong Kong is an ideal venue given the prevalence of shark-hunting in many Southeast Asian countries and the city’s position as an economic and cultural hub, making it ideal to “convey a strong message to the public.”

“We wondered whether there was another way to tackle this … social problem,” said Alex Wong, from Parkview Arts Action, in an interview with FORBES. 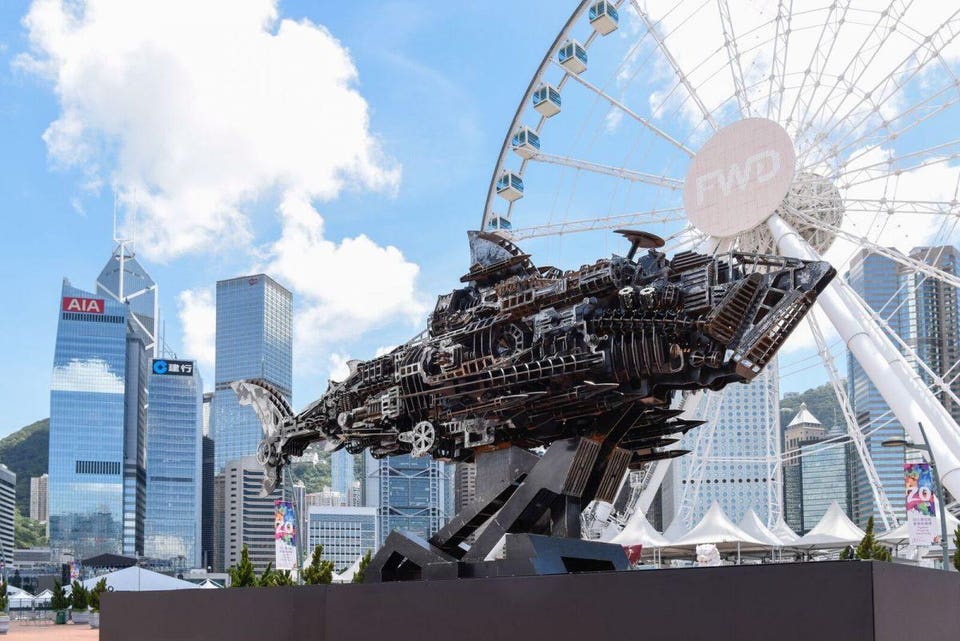 Xia Hang’s “To Poseidon” portrays a shark as a warship — a solder of Poseidon — strong and resistant to attack. (Parkview Art Action)

He said the exhibitions around the world — including Moscow and Beijing — have been well received. “Generally, people are interested in the subject — about shark protection — but now this exhibition provides them with a different kind of appreciation of the problem … a different way to understand what’s going on.

“What we’ve done is to provide a different narrative.”

The artists did exactly that — they created a number of provocative works, from giant sculptures to film and photography, that have provided an altogether different museum experience; one the organizers hope will “bring attention to the social, cultural, biological and political issues related to sharks.” 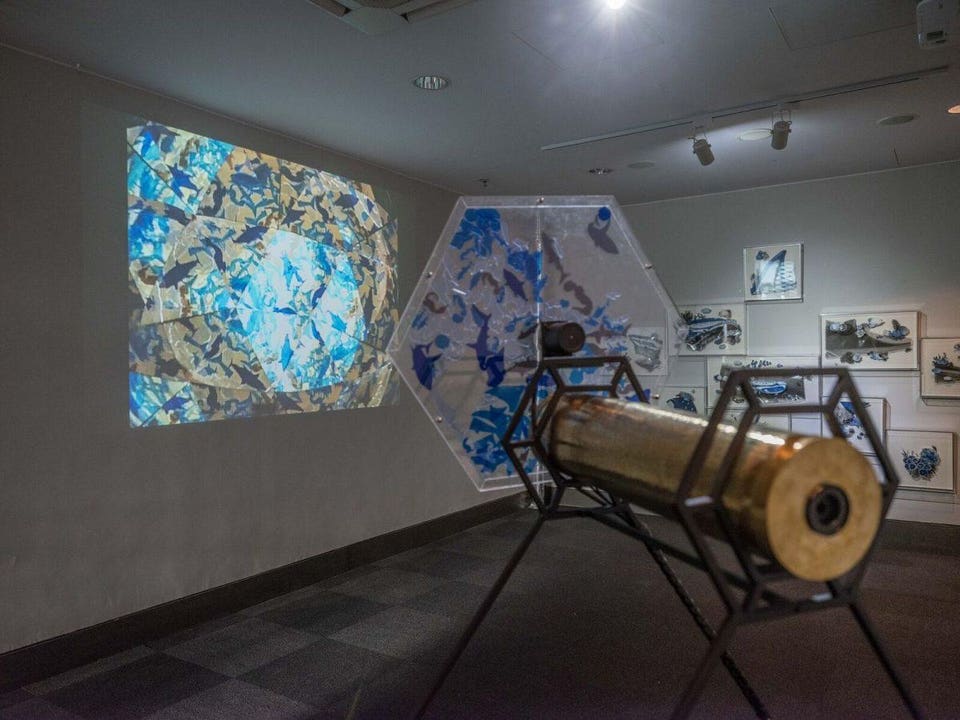 Hong Kong-based artist Peggy Chan created “The Shore Beyond,” a beautiful but head-spinning collage of colors and reflections — what the artist describes as reconstructed fragments from three interacting elements: humans, sharks and the ocean. Chan’s body of work — which includes paintings, photos and video — has previously explored the triangular relationship between the individual, the city and nature.

Another powerful exhibit by Chinese artist Ren Zhe is a bronze installation of a “warrior” trying to free himself from a fishing net.  According to Ren, “Guardian” symbolizes the “desire to obtain freedom and authentic joy, which can be achieved by freeing oneself from ‘the net’ of greed.” He says the figure is the embodiment of strength and energy within traditional East Asian culture. 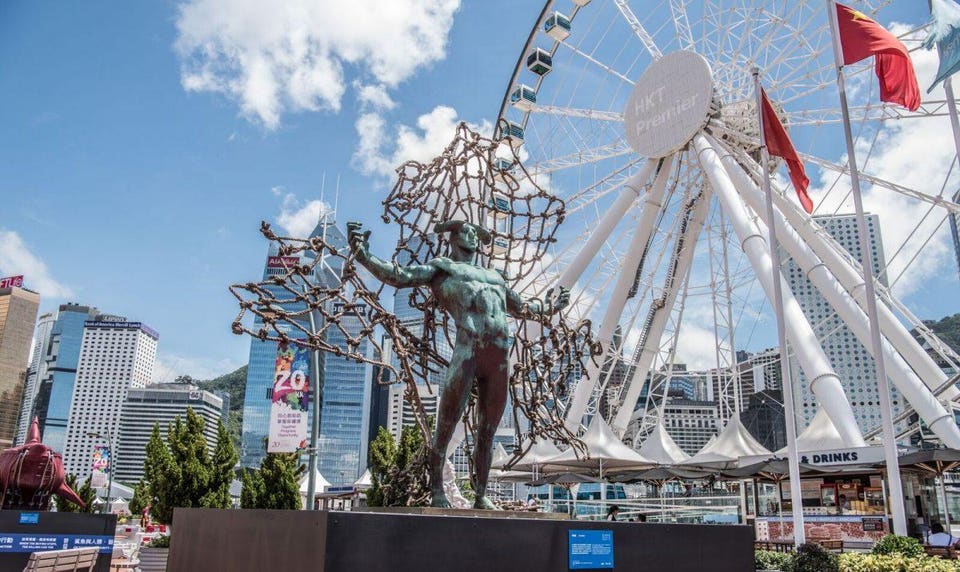 Taiwanese artist Hou Chungying chose oil on canvas to depict a girl eating ice cream — the shark is the dessert and it’s melting. Called “It is neither a food nor a snack,” the artist says the intention here is to mimic real life, as shark numbers decline and nature disintegrates.

“The exhibition fully embodies the ideals, beliefs and actions of the artists in their commitment towards protecting sharks,” said Huang Du, the curator of the event. “They have provided subjective interpretations regardless of concept, language or form, and created works that display a great visual tension and visual philosophy.”

Meanwhile, Parkview’s Wong said he believes exhibitions like this, which tackle the whole issue of shark conservation from an alternative way of understanding the problem, and also the work of organizations like WildAid, are seeing results when it comes to spreading the message of conservation.

“We’re now bringing up a new generation of kids who now already, as they’re growing up, think shark’s fin (soup) is bad,” he said. “That is a very important step for us. That’s why we also have two child artists in this exhibition — who in their own naïve and simplistic way show that we should love these animals.”